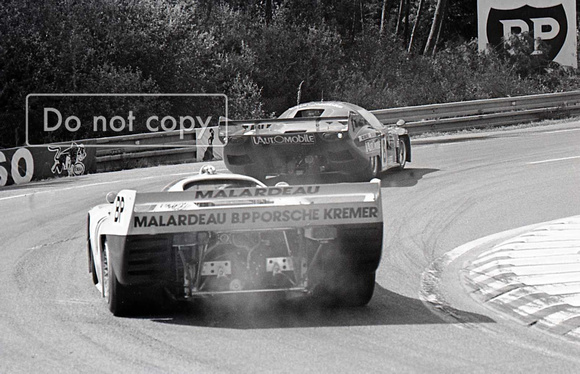 THE KREMER 917 K
1981 LE MANS 24 HOURS
With their 935 models selling by the dozens Kremer looked to spend their funds on a new project. The company discovered a loophole in the regulations that would allow a machine such as the old 917 to run once again. Enthused by the idea they set out to buy and modify a chassis to compete in the 1981 Le Mans 24 Hours.
The car’s tube frame chassis was re-engineered and strengthened and a brand new body was fitted. Other than the structural and aerodynamic changes, the car was basically the same as it had been in the early 1970’s. It still carried the 5L 912 air-cooled flat-12 engine, now producing around 570 horsepower.
ABOVE INFORMATION WAS SENT TO ME AND WRITTEN BY DYLAN SMITH
RECOMMENDED SIZE 12 X8 INCH
30 X 20 CM
Category:Sports
Subcategory:Motor Sports
Subcategory Detail:
Keywords:1981, 917K, KREMER, KREMER, LE, MANS, PORSCHE, PORSCHE
© motoring-man